The World of Film was visited by the Masque of the Black, rather than Red, Death, this year. No, not Plague, but Time. While you listen to some appropriate Funerary Music, here’s a selected roll-call of stars now under management of One Sole Agent:

Wilford Brimley – the gruff and grizzled descendant of Walter Brennan appeared in key supporting roles in Brubaker, The China Syndrome, The Thing, Tender Mercies, The Natural and The Firm but for our money, he was at his best in a small key role in Absence of Malice (1981). 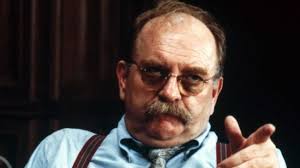 Brian Dennehy – Brian was almost too big for the screen and had a better career on stage, but he enlivened some good (and bad) films: FX, First Blood, Best Seller, The Belly of an Architect, Presumed Innocent and his very creepy clown (John Wayne Gacy) in To Catch a Killer.

Allen Garfield – His wry and knowing supporting men almost invariably enhanced their films and were often the best thing about them. He particularly shone as the political PR man in The Candidate, Gene Hackman’s bugging competitor in The Conversation, and the querulous script-writer in The Stunt Man.

Olivia de Havilland – Not the greatest actress perhaps, and a tad treacly, but delicate, dainty and winning – we’ll take it!  See The Adventures of Robin Hood, Gone With the Wind, Raffles, To Each His Own, The Heiress, and she really extended her range in The Snake Pit and Hush…Hush, Sweet Charlotte.

Buck Henry – His scripts propped-up heaps of films and in the right niche part, he was an amusing presence on screen as well: think The Graduate, Catch-22, Heaven Can Wait, Eating Raoul, Defending Your Life, and To Die For.

Ian Holm – Famous for playing a hobbit, his subtler range can be seen in A Severed Head, a rather robotic turn in Alien, a leek-loving but feisty Fluellen in Henry V, and The Sweet Hereafter.

Terry Jones – One of the greats. Monty Python’s Flying Circus was not only a seminal force in British comedy, it still holds up (!)  And Terry’s directorial efforts in Python films kept the lads in check and still satisfy as films, no mean feat for TV crossovers: Monty Python and the Holy Grail and Life of Brian being standouts. In Heaven, they’ll forget his very worst film, Absolutely Anything, but TVC, like the Bourbons, has forgotten nothing.

Irfan Khan – We do not know much of Mr. Khan’s work (and he died too young), as he was active in Indian cinema but for international efforts such as Slumdog Millionaire and The Life of Pi, but he has a seat in the Pantheon for a brilliant performance in A Mighty Heart. (By the way, the Pakistani government may have to soon release Omar Sheikh, the mastermind behind the kidnapping and murder of Daniel Pearl, the subject of the film. Fair enough, if he’s done his time…but…).

Sue Lyon – She was (safely) too old for the part, but otherwise terrific as Lolita.

Ennio Morricone – The greatest Italian composer of film music was also one of the greatest composers of film music. Our favourites: L’Avventura, The Battle of Algiers, The Good, the Bad and the Ugly, Investigation of a Citizen Above Suspicion, The Burglars, Bluebeard, 1900, The Mission, The Untouchables, Frantic, and Cinema Paradiso.

Alan Parker – A humble man with humble beginnings and much to be humble about, his filmography speaks not to ego but opportunity – opportunity for one of film’s great stylists.  His films, like ’em or not,  bear the stamp of a deep stylistic aptitude and sensibility: Midnight Express, Fame, Shoot the Moon, Birdy, Angel Heart, Mississippi Burning, The Road to Wellville.

Reni Santoni – He started in small but signal parts in The Pawnbroker and Enter Laughing, but is immortal as the garrulous but unhygienic restauranteur Poppie in Seinfeld – “Poppie’s a little sloppy” – and as the first unfortunate sidekick to Dirty Harry.

Joel Schumacher – His films were drivel, except for Falling Down, a hip, hypnotic and hilarious riff on the fraying of the American middle class.

Max von Sydow – The great Swede made too many appearances to summarize, so we’ll just mention a handful of him at his best: The Seventh Seal, The Virgin Spring, Shame, The Night Visitor, The Exorcist , Steppenwolf, Hannah and Her Sisters, Awakenings, Hamsun, and Pelle the Conqueror.