On Thursday evening, 8 November 2018, former MP and PM Malcolm Bligh Turnbull appeared, jauntily jacketed, sans necktie, to “face” the nation (well, the carefully screened Q & A audience, one of whom, in a priceless moment, addressed him as ‘Tony’) in ABC’s Ultimo studios.

He knew his enemies.  Like the Nixon Administration, Turnbull-in-Exile has drawn an Enemies List.  The enemies include Mathias Corman, News Limited (Rupert Murdoch), Peter Dutton, Radio 2GB, Right-wing extremists (see ‘Tony Abbott’ below), Sky News, Tony Abbott.  This is not an exhaustive list.  Perhaps Malcolm will release a complete one in due course, just before the next Federal Election.

Yes, he knew his enemies, but not their motivation.  For the life of him, he could not fathom why the various forces arraigned would ‘blow-up’ his government, an obvious act of madness.  Maybe they had a death wish?  Maybe they secretly wanted to lose the next election, what with employment up, and so on. It was something all Australians were entitled to know, but he couldn’t assist.  He was genuinely in the dark.

We feel this must be fundamentally true.  Malcolm will always be in the dark, because he couldn’t find illumination with a torch or a coal-fired power station.  The Varnished Culture will try to help. As to the answer he so fervently seeks, we’re not sure that most Australians care – most are fairly robust about losing Prime Ministers – life goes on, stocks go up and down, who cares?  Even about you, Mal.  But we understand that you care about you, very deeply.  So here goes.  We surmise that you were challenged and forced to remove yourself as Prime Minister because: 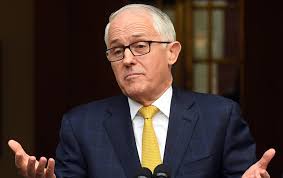