The master of iridescent, intense, orogenic paintings, rocketing up to a boiling grey sky – so high the artist seems to want us to genuflect whilst viewing, preferably in dread as well as admiration. Filled with preternatural radiance and colours and sinuous, writhing, stretched bodies that eerily crowd his paintings, spurning conventional balance of framing, this singular genius and his dramatic and expressionistic style was first fêted, then ignored, then disparaged, then re-discovered.

From Crete to Venice to Rome to Holy Toledo, ‘El Greco’ was influenced by Italian masters such as Titian, Veronese and Tintoretto (who also used clay figures) but ultimately he is very individual, quarrelsome and awe-struck by no-one. Modern taste regards him as too pious, too mannered, but he remains one of the great painters of Spain. (Without El Greco, no Picasso, nor for that matter, believe it or not, Jackson Pollock.)

Influenced by Byzantine aesthetics, his vertical, ethereal compositions brought to the High Renaissance a touch of mannerist mysticism.  “The painting of El Greco has influenced contemporary art more than that of any other Old Master…its unearthly lighting effects, and its avoidance of all that is trivial or belonging to the daily round, as well as its, as it were, religious seclusion, in a region of moonlit rocks…”+

The Burial of the Count of Orgaz “possesses a psychological intensity which is not surpassed even by Velasquez.”~ 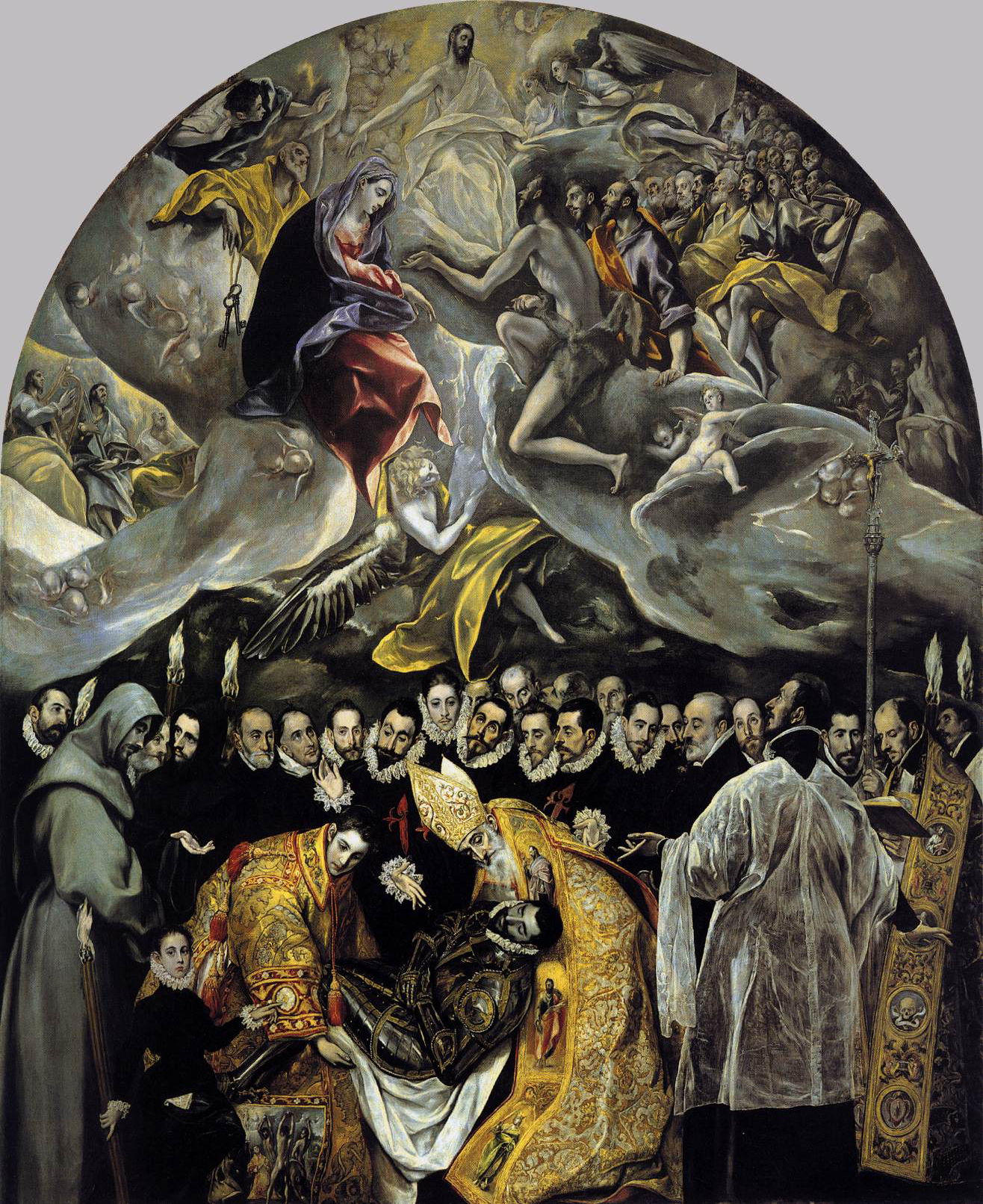 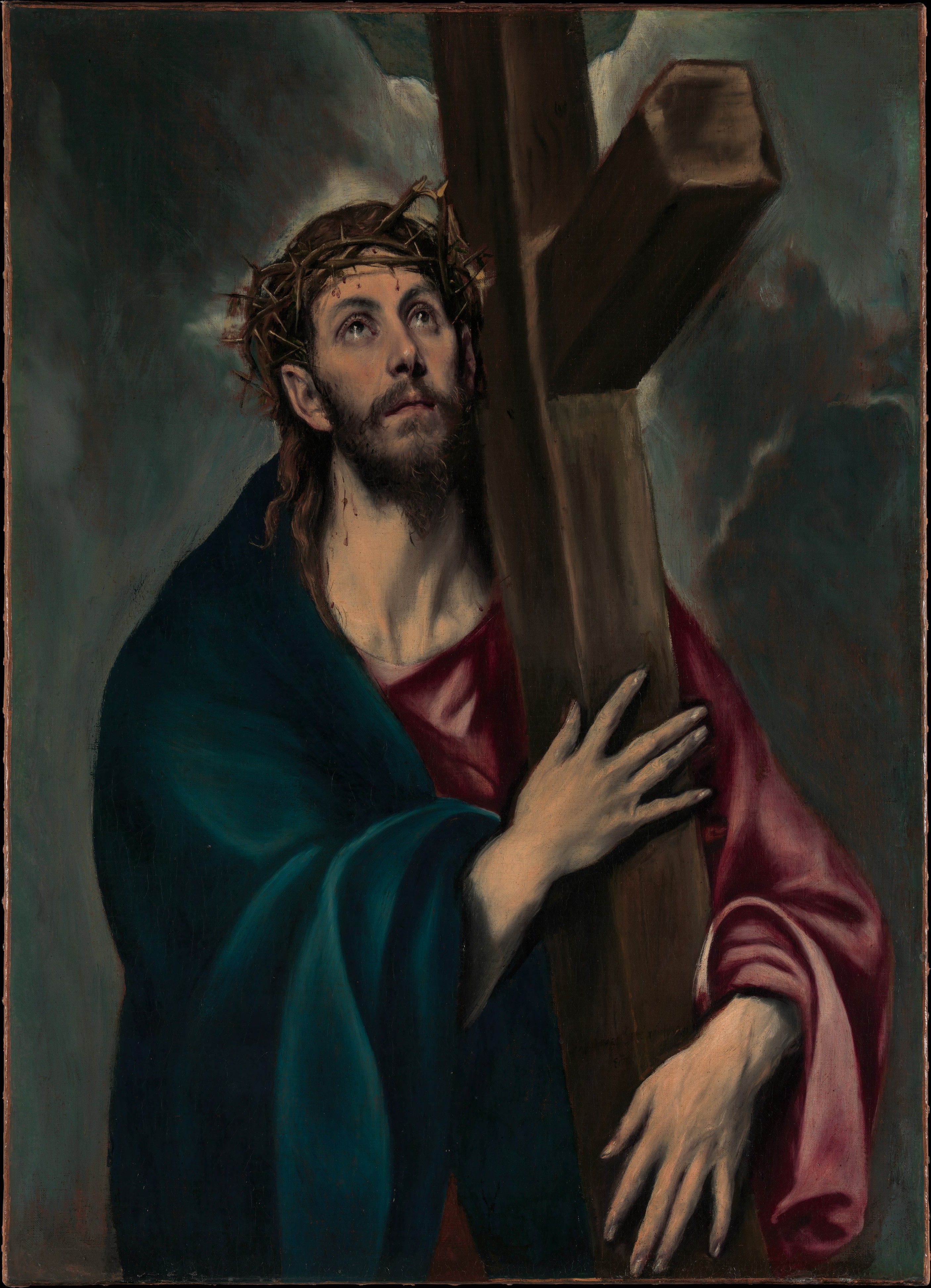 “The Crucifixion” (1597 – 1600) The Prado’s note: “El Greco painted the scenes in small spaces, emphasizing the vertical format, and bathing them in a ghostly light that enhances the unreality of the figures, which are arranged in a very marked foreshortening and have very expressive features. The colours – cold, intense and contrasting – are applied very loosely over powerful anatomical constructions, and are perfect examples of El Greco’ s highly personal style in the final stretch of his career.” 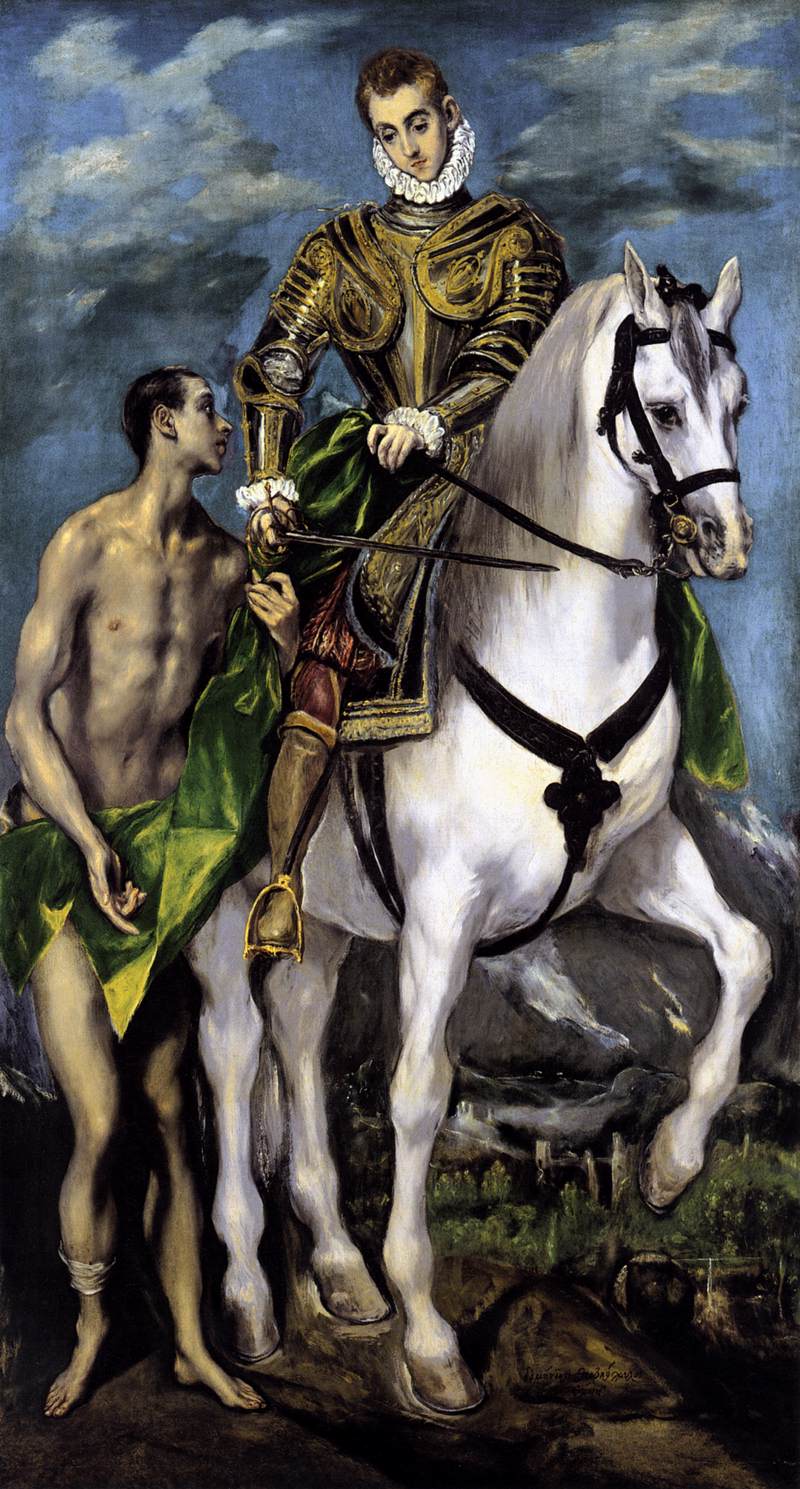 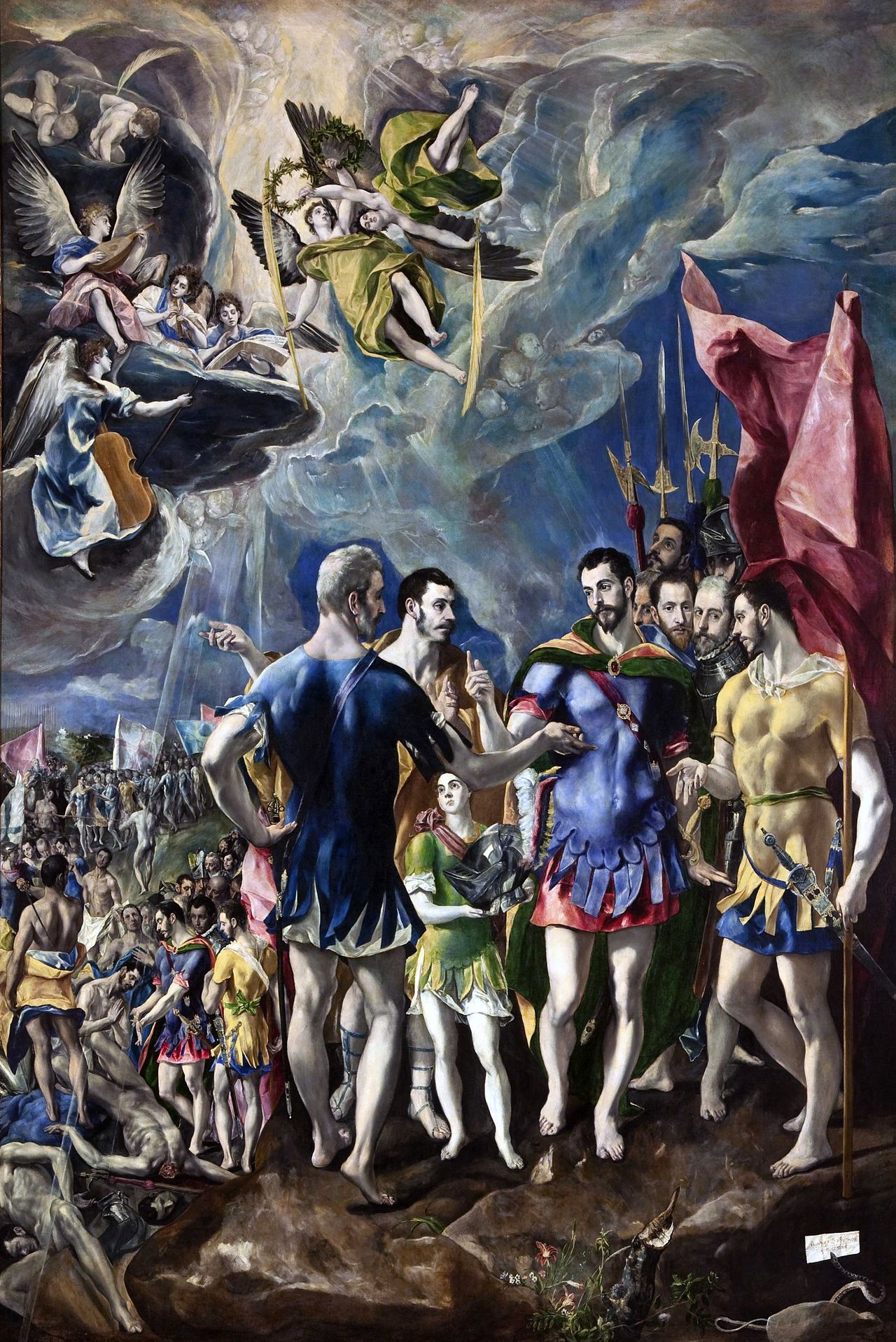 “El Greco’s art surpasses even Tintoretto’s in its bold disregard of natural forms and colours, and in its stirring and dramatic vision.”^ 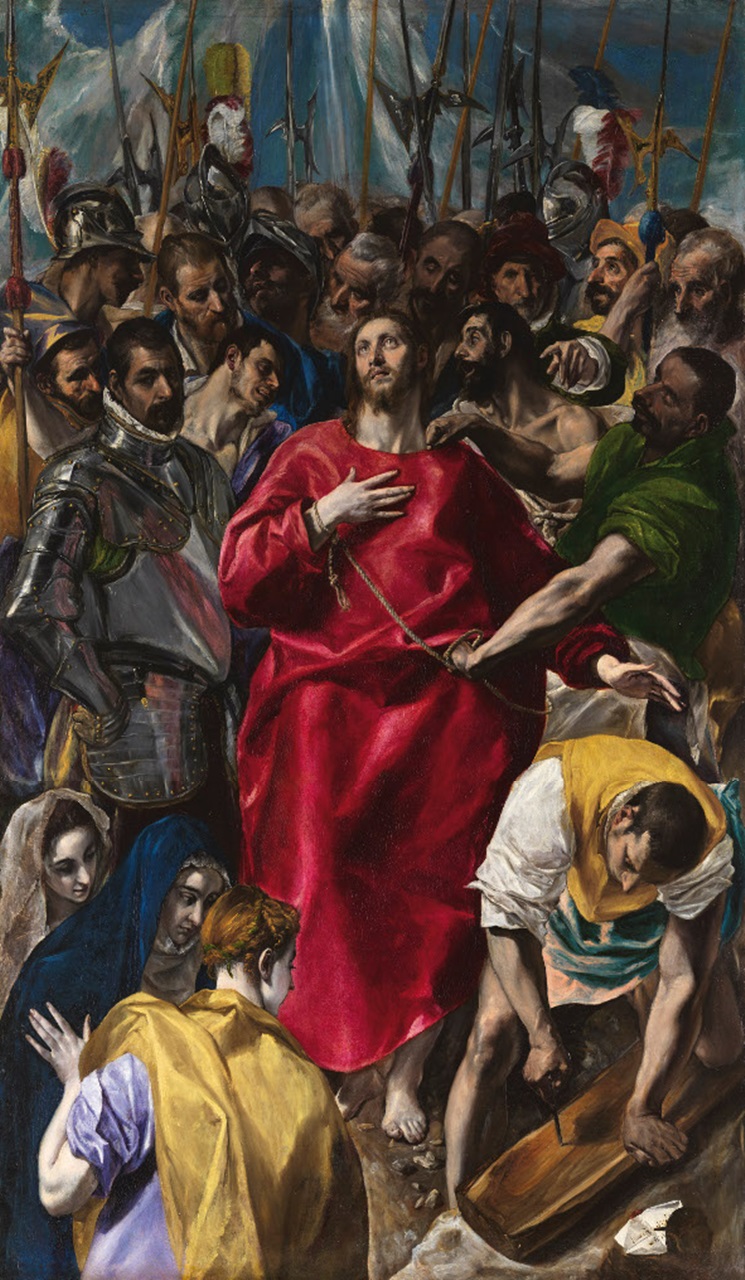 “El Expolio” or “The Disrobing of Christ” (c. 1577-79) (Already we see El Greco moving innovatively beyond his mentors)

The Master of convulsive postures: “The Assumption of the Virgin” (1577)

“The religious organizations and cathedral chapters of Toledo had the acrimonious differences with El Greco which so often occur between a corporation and an outstanding personality, but they never ceased to engage him to paint their altar-pieces and other pictures.”* 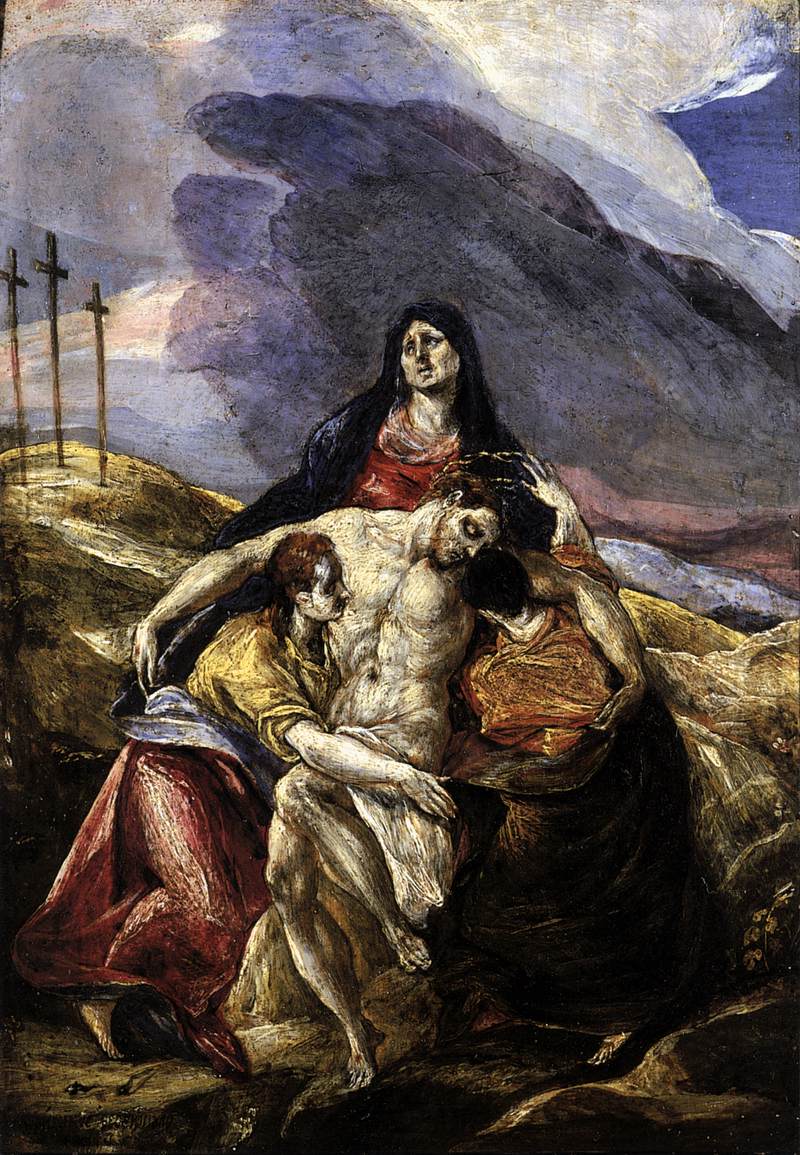 Also a superb portraitist: “The Nobleman with his Hand on his Chest” (c. 1580) Without evidence, we amuse ourselves with the conceit that El Greco was channeling Cervantes, who later wrote his ‘portrait’: “of aquiline countenance, with dark brown hair, smooth clear brow, merry eyes and hooked but well-proportioned nose; his beard is silver though it was gold not 20 years ago; large moustache, small mouth with teeth neither big nor little, since he has only six of them and they are in bad condition and worse positioned, for they do not correspond to each other; the body between two extremes, neither tall nor short; a bright complexion, more pale than dark, somewhat heavy in the shoulder and not very light of foot.”

In one of his final works, The Adoration of the Shepherds, “Reds, oranges, jade greens, golden yellows and dark blues are livened up or attenuated by the light which radiates from the new-born Babe, Who like a living beacon dominates the center of the composition…..[possibly] the shepherd in the foreground is the last self-portrait that El Greco does…“#

“Opening of the Fifth Seal” (c. 1608 – 1614) “…I saw under the altar the souls of those who had been slaughtered…they cried out…’how long will it be before you judge and avenge our blood…?'”

“Surely no exact and accurate drawing could ever have expressed with such an uncanny and convincing force that terrible vision of doomsday, when the very saints call for the destruction of this world. It is not difficult to see that El Greco had learned much from  Tintoretto’s unorthodox method of lopsided composition, and that he had also adopted the mannerism of over-long figures like that of Parmigianino’s sophisticated Madonna…But we also realize that El Greco employed this artistic method with a new purpose. He lived in Spain, where religion had a mystic fervour found hardly anywhere else.” ^^ 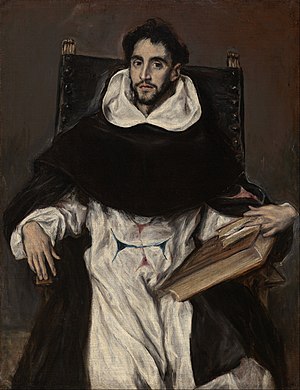 His friend, Brother Hortensio Paravicino, who the artist painted in 1609 (above) wrote of El Greco in epitaph: “Crete gave him his life and brushes; Toledo a better fatherland where he begins to achieve in his death eternity.”