Trotsky hated anarchists. Anarchists do not belong in the corridors of power (which they seek to explode), or dark and dusty back rooms of evil-looking pubs, or marching in the streets, or in any organized gathering, in fact. “The anarchists have suffered as much as any minority from the historian’s cult of success. They never made a successful revolution. Their political theories are full of logical flaws and mistaken assumptions. The sympathy which one type of anarchist doctrine might have won has been lost by the ruthless and senseless violence and terrorism which was characteristic of another school of anarchist practice. Nevertheless, the theory and practice of the anarchists over the last hundred years have raised a number of questions about the nature of industrial society.”* To which there have been few straight answers: thus Anarchists are best employed in the performing arts. 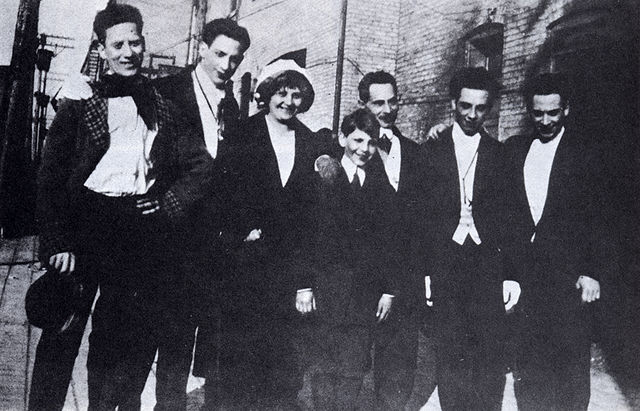 ‘These are our principles, if you don’t like them we have others.’

Practised in vaudeville, they made their way to Hollywood, which didn’t much know what to do with them – until they let them loose. Their anarchic approach to films was and remains both legendary and unique, which is why they remain so venerated, even today. They never pandered to audiences: indeed, they didn’t notice them, so gloriously did they inhabit and flower in their own, lunatic, antic world, assuming we would, naturally, join them.

Groucho’s machine-gun delivery would’ve been even too fast for the characters in His Girl Friday; we love his ‘zingers,’ such as: “Go, and never darken my towels again!” (as Rufus T. Firefly in Duck Soup), “You’re willing to pay him a thousand dollars a night just for singing? Why, you can get a phonograph record of Minnie the Moocher for 75 cents. And for a buck and a quarter, you can get Minnie.” (as Otis B. Driftwood in A Night at the Opera), “You must fan the flames of love with the bellows of indifference” (as S. Quentin Quale from Go West), “You’re the most beautiful woman I’ve ever seen, which doesn’t say much for you” and “How happy I could be with either of these two if both of them just went away”(as Captain Jeffrey Spaulding in Animal Crackers).

“The world would not be in such a snarl, had Marx been Groucho instead of Karl” (Irving Berlin)

Chico, the outrageously bogus Italian, is all conscious, wheedling charm, except when he sits and extemporizes at the piano (when the charm is akin to a broom with a smiley-face painted on it, but at least natural).

Den of gamblers…Chico playing cards with himself

Harpo is almost unique in cinema: a lecher, a thief, a vandal, a terrorist: an unworldly, innocent, good natured, lovable, ferocious villain. Bent on destruction and advantage for his own mystifying ends, he is the most outrageous of them all, albeit sometimes so in brief, fragile joint venture with Chico.

The unofficial Marx Brother, indubitably, was the incomparable Margaret Dumont…full of rectitude, fortitude; anxious to observe societal norms, yet so lovingly inclined to take the Marx’s seriously and forgive their often criminal transgressions.

Their best work is in Animal Crackers (1930), Monkey Business (1931), Horse Feathers (1932), Duck Soup (1933) (banned by Mussolini, to the boys’ great delight), A Night at the Opera (1935) and A Day at the Races (1937).  The anarchy on display sorts well with the repeated structure of the films: the lads are in a situation to which they do not react but act regardless. The civilians making up the numbers are present purely to be derided and or avoided.

Here’s Chico and Harpo’s idea of card-playing, from Animal Crackers:

and the ‘mirror’ scene from Duck Soup:

Dr. Hackenbush tries to stifle Steinberg in A Day at the Races (1937), with help from medical assistants from Joe’s Service Station (“and don’t point that beard at me, it might go off!“)

…and our favourite: crowded amidships, from A Night at the Opera (1935)…the great Margaret Dumont to the rescue again!

Groucho checks out the merchandise…“Folks, you are now in Cocoanut Manor, one of the finest cities in Florida. Of course, we still need a few finishing touches, but who doesn’t?”

As Woody Allen says in his (almost-expunged) memoir, Apropos of Nothing, “Of course, the Marx Brothers and W.C. Fields are the absolute greatest.” And famously, in Hannah and Her Sisters, the depressed character is cheered-up by a lovely bit of Marxist nonsense: so let’s have a parting toast with the boys’ stirring, rousing national anthem from Duck Soup, plus a quiet moment from Harpo:

“Give flowers to the rebels failed.”