The great Irish satirist still has great things for us to hear, even over the distance of more than two and a half centuries. He anticipates Phillip Roth, without the laughs. His calm venting of spleen as fact, his wit, style  and imagination, his quill aimed stiletto-like at the pompous, the prideful, and the pedantic (“Pedantry is properly the overrating any kind of knowledge we pretend to. And if that kind of knowledge be a trifle in itself, the pedantry is the greater“) still resonate.

“So, naturalists observe, a flea
Hath smaller fleas that on him prey;
And these have smaller still to bit ’em;
And so proceed ad infinitum.
Thus every poet, in his kind,
Is bit by him that comes behind.”

(A neat synthesis of Harold Bloom’s Theory of the Anxiety of Influence).

Of course, his fantastic joke-travelogue. Gulliver’s Travels (1726), is best known: mock heroic voyages by Lamuel Gulliver among dwarves, giants, talking horses and floating islands.  “Is there any other instance of a savage satire, one of the most ferocious indictments of the human race in all literature, being transformed into a nursery favourite?“*

But he touched on many a universal subject, here and there.  Here are his thoughts within “A Treatise on Good Manners and Good Breeding”: “I insist that good sense is the principal foundation of good manners; but because the former is a gift which very few among mankind are possessed of, therefore all the civilized nations of the world have agreed upon fixing some rules for common behaviour, best suited to their general customs, or fancies, as a kind of artificial good sense, to supply the defects of reason. Without which the gentlemanly part of dunces would be perpetually at cuffs, as they seldom fail when they happen to be drunk, or engaged in squabbles about women or play. And, God be thanked, there hardly happens a duel in a year, which may not be imputed to one of those three motives. Upon which account, I should be exceedingly sorry to find the legislature make any new laws against the practice of duelling; because the methods are easy and many for a wise man to avoid a quarrel with honour, or engage in it with innocence. And I can discover no political evil in suffering bullies, sharpers, and rakes, to rid the world of each other by a method of their own; where the law hath not been able to find an expedient.”

“The worthiest people are the most injured by slander, as is the best fruit which the birds have been pecking at.”

“The two maxims of any great man at court are always to keep his countenance and never to keep his word.” Said J.B Priestley of The Battle of the Books, that it “mocked the dispute as to whether the modern French authors were superior to the ancients….This ridiculous dispute was taken seriously outside France, for if it was good enough for French poets, critics, scholars, it was good enough for all cultivated persons (except Swift) outside France.”*  (plus ça change, plus c’est la même chose.)

“Partial judges that we are of our own excellencies, and other men’s defaults!”

“It is useless to attempt to reason a man out of a thing he was never reasoned into.”

His famous sardonic advice to Ireland’s poor to sell their offspring as food would today start a Storm of Tweets and Trigger-Warnings:

“I have been assured by a very knowing American of my acquaintance in London, that a young healthy child well nursed is at a year old a most delicious, nourishing, and wholesome food, whether stewed, roasted, baked, or boiled; and I make no doubt that it will equally serve in a fricassee or a ragout.” (from A Modest Proposal, (1729)).

And here are more apt thoughts for Today:

“When a great genius appears in the world you may know him by this sign: that the dunces are all in confederacy against him.”

More full of wit than humour, he went a lot mad at the end, and, unlike a struldbrugg, was actually, rather than legally, dead at age 80.

‘Dean’ Swift’s epitaph (from the Latin):

“Go forth, Voyager,
and copy, if you can,
this vigorous (to the best of his ability)
Champion of Liberty.” 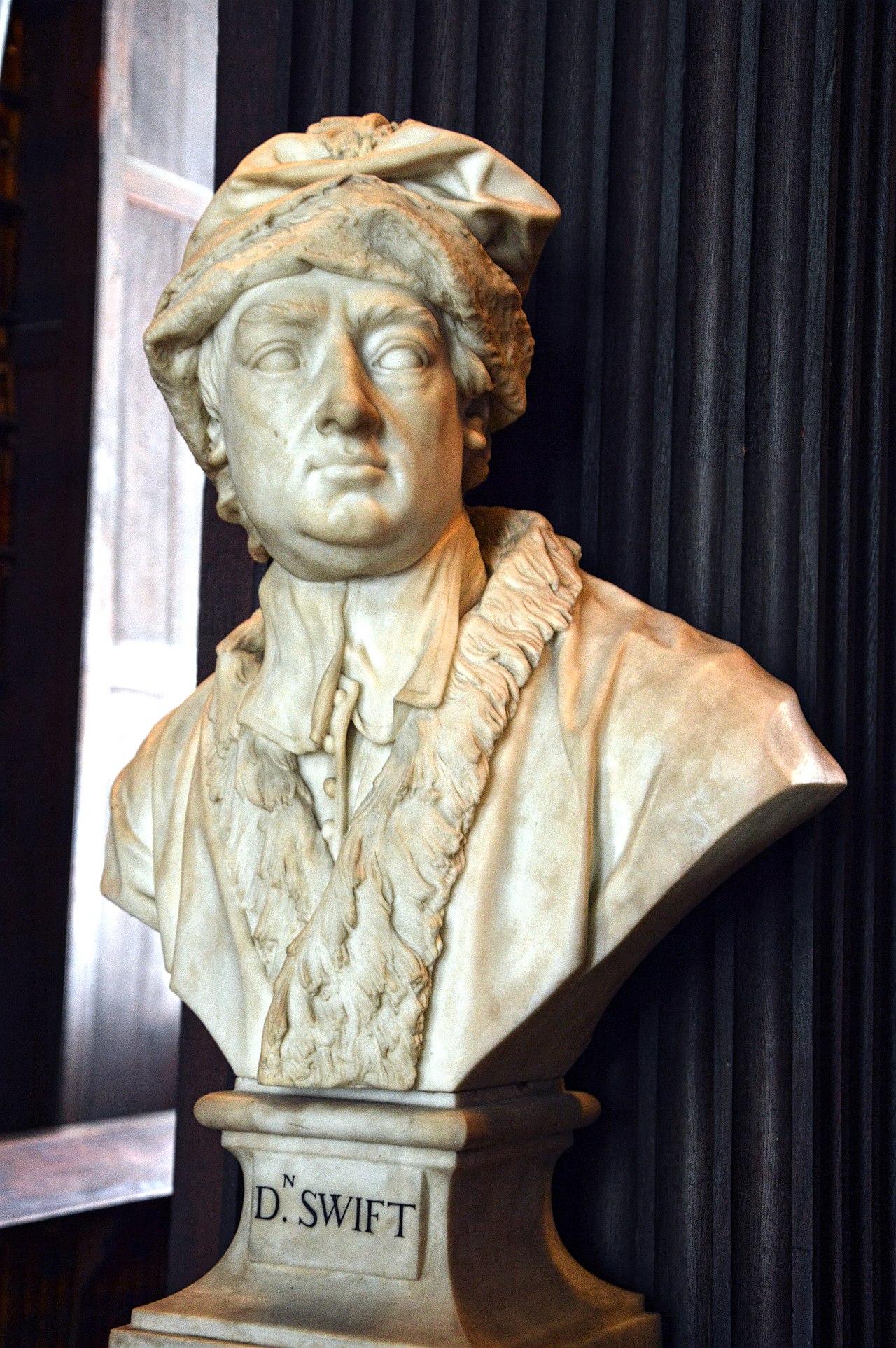 A penny for his thoughts.