Suspense need not be a mystery. Out of the so-called 7 plots, the dramatist’s art is to finesse the selected one. As with Shakespeare, it matters not that we know the ending. In Nitram (‘Martin’ backwards, as is Martin), the story (about Martin Bryant, going ‘postal’ in April 1996) is notorious. Here, the director creates an intimate, very private background to a very public tragedy, and does it with great depth of feeling and beautiful pacing.

It is a small town saga (the south-east coast of Victoria standing in for Port Arthur, probably for political reasons, or perhaps basic human sensitivity), as we meet Martin (never, by our reckoning, named throughout), an overaged child, obviously challenged and with arrested development, apt to do dangerous things, and his desperately miserable parents. The futile efforts to treat his mental problems are disturbing and overfamiliar, evoking a desire for the building of a new, kinder Bedlam.  Inevitably, the issue of access to guns arises – a worthy debate, discussed in our account of the real event (linked above) but here it is not sledgehammered home (and probably does not need to be).

After want and emotion conquer logic and fact, Martin moves out, and then in with the crazy cat lady, for whom he has failed to mow the lawns. She turns out to be a rich eccentric (natch) who stakes Martin in his absurd ambitions – till it all goes wrong. 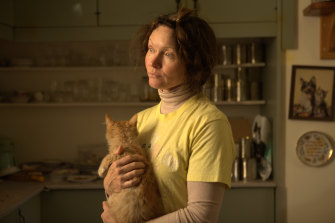 There can be no quarrel with the acting. Judy Davis, as harsh-but-fair Mum, and Anthony LaPaglia, as weak, defeated and ineffectual Dad, are superb. Essie Davis is wonderfully blurry as Helen of the dogs and cats. The supporting cast are all good, particularly the not-so-nice surfie (Sean Keenan) who decides, in good time, to stop razzing Nitram. The film belongs to Caleb Landry Jones, however, as the man-child. He has specialised in portrayals of damage (Get Out, Three Billboards…) and here he is vibrant with anger and confusion, and with an authentic Australian accent to boot.

The conclusion may be discreet, even tasteful, but the build-up has been so vivid by then as to leave the viewer vaguely cheated of a violent catharsis. Ignoring the massacre is a plausible move from an interesting director prone to strategic mistakes – vide his Macbeth.  Elephant managed to show a rampage without being exploitative: surely here a way could have been found (perhaps showing Nitram on his lethal errand without displaying the bodies piling up). Along the way, there are touches here and there that whilst satisfying dramatically are freighted with the baggage of elucidation: for examples, Nitram recalls burning himself with his beloved firecrackers – and resolves to keep on lighting them; Mum tells Helen about the time sonny went missing and laughed at her fear and pain. These would apply to a thousand healthy boys: there really need and perhaps should be no attempt in an entertainment such as this to even try to explain.