How Coronavirus Hysteria Took Over Our Government, Rights, and Lives (by Alex Berenson) (2021)

This splendid book is both a comprehensive review of how the world got everything wrong about Covid-19 (or, if you have a conspiratorial bent, how the plague was weaponized by authoritarian forces to cow and terrify us into submission), and a story of how one man kept yelling from the back of the truck that this emperor had a spiked crown but no clothes. Or in his words, “how media hysteria, political partisanship, overreliance on unproven technology, and scientific illiteracy brought the United States and the world to the brink of breakdown.”

The author is a former staff writer for the New York Times, a fact that we think, somehow, the Times wants to forget, who became (by his own admission) obsessed by the virus and the noise circling its spiky little wreath.  As will become clear, the monopolies that control our information have no time for him – here’s an extract of his Wikipedia entry: “During the coronavirus pandemic, Berenson appeared frequently in American right-wing media, spreading false claims about COVID-19 and its vaccines. He spent much of the pandemic arguing that its seriousness was overblown; once COVID-19 vaccines were rolled out, he made false claims about the safety and effectiveness of vaccines.”

As will also become clear, his false claims tended to be outrageously true. 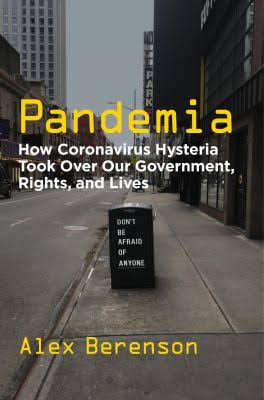 We will summarize the various points he makes, but our earnest and urgent exhortation is: read this book.

Of the virus itself, Berenson points out that:

Of the reportage, the author notes:

On the response by the various authorities:

[To paraphrase Thomas Mann at Princeton University in 1941, “If ever fascism should come to America, it will come in the form of a public health edict.”]

Put your head over the crenellated parapet of Covid and you’re going to take hits.  The NY Times, Berenson’s former paper, disowned him; some family and many friends & colleagues shied away; he was subject to death threats and vitriol on social media (including Twitter, natch, from which he was ejected); the legacy media vilified him for giving interviews to the fascist media (i.e. Fox), the only TV station to show interest; and he became catnip for hit-pieces such as in The Atlantic, which called him, in an 1 April 2021 article, “The Pandemic’s Wrongest [sic] Man” (their cover photo below).

Berenson concludes with a cris de cœur for truth, free debate, and calm. He cites Donald Henderson, a man who helped to eradicate smallpox, one of the few viruses we have seen off:

“Experience has shown that communities faced with epidemics or other adverse events respond best and with the least anxiety when the normal social functioning of the community is least disrupted.”  We add an earlier cited quote from the book, by a famous disrupter: “Don’t be afraid of Covid. Don’t let it dominate your life.”

And The Varnished Culture will add that life henceforth must be better than that summed-up by Albert Camus in The Plague: “Thus, in a middle course between these heights and depths, they drifted through life rather than lived, the prey of aimless days and sterile memories, like wandering shadows that could have acquired substance only by consenting to root themselves in the solid earth of their distress.”