“I do not desire little stories” quoth the German customer in the bookshop where George Orwell worked. And yes, you have to be in the mood. But the right one can repay attention with greater interest than a great many ho-hum novels. Here are my favourites:

Cathedral by Raymond Carver (1981) Whilst we are not a real fan of Carver, we liked the simplicity of this piece, and its way of managing to ‘only connect.’

Hunters in the Snow by Tobias Wolff (1976) Buddies, guns, snow, neuroses – what could go wrong? Well, the ‘fattist’ could get shot by the fattest…

A Lady With a Dog by Anton Chekhov (1899) As Nabokov commented: “…all this pathetic dimness, all this lovely weakness, all this Chekhovian dove-gray world is worth treasuring in the glare of those strong, self-sufficient worlds that are promised us by the worshippers of totalitarian states.”

The Lottery by Shirley Jackson (1948) The madness of the mob led to author Jackson being metaphorically stoned.

Man at Bay by Howard Bloomfield (1958) A film noir script in the making if there ever was one. A beef-cattle joint venture in the Bahamas, entered into with cautious safeguards, fails to include the possibility that one partner might throw the other overboard.

The Metamorphosis by Franz Kafka (1916) The opening line tells you all you need to know – about Kafka: “As Gregor Samsa awoke one morning from uneasy dreams he found himself transformed in his bed into a gigantic insect.”

The Nose by Nikolai Gogol (1836) A man’s nose detaches and takes on a life of its own. Gogol at his most magically absurd.

A Perfect Day for Bananafish by J.D. Salinger (1948) Totally banal, totally random, totally moving. Janet Malcolm in the NYRB wrote that Salinger saw life “as a battleground between the normal and abnormal, the ordinary and the extraordinary, the talentless and the gifted, the well and the sick.”

Rain by W. Somerset Maugham (1921) Missionary work gives way to a missionary position, in this classic fable of lust and despair.

The School by Donald Barthelme (1982) Hilariously dark and matter of fact in its recital of catastrophes, one on top of the other. My favourite line: “I forgot to mention Billy Brandt’s father, who was knifed fatally when he grappled with a masked intruder in his home.”

The Shout by Robert Graves (1929) A tale of terror for those with sensitive eardrums.

The Silent Partner by Lesley Jakobsen (2014) The ne plus ultra of paranormal reality. I’m biased in this case, of course…

The Swimmer by John Cheever (1964) A post-separation psychodrama, the kind of thing Cheever was so awfully good at. 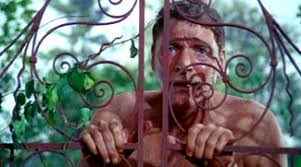 The Tell-Tale Heart by Edgar Allan Poe (1843) In Edgar’s world of shadows, innocent organs – a frightened eye, a ringing ear, a beating heart – take on their own essential identity. A classic tortured confession story.

Where are you going, where have you been? by Joyce Carol Oates (1966). As Oprah wisely taught us, “Do Not Go To the Second Location.” This dreadful tableau is perhaps Ms. Oates’ best and most superbly concise work.

While Earthmen Sleep by Ray Bradbury (1958). A routine trip to Mars has Earthmen back in their homes from childhood on earth. Or are they?

The Yellow Wallpaper by Charlotte Perkins Gilman (1892) This classic could easily be adapted to modern Covid-19 governance.