“This never happened to the other fellow”

The Music of James Bond with George Lazenby

My parents used to receive coarse brown envelopes in the mail bearing the enigmatic label ‘OHMS’, but invariably containing something disappointing (most often a bill). How much more exciting to be On Her Majesty’s Secret Service, as George Lazenby was in 1969. Conductor, Nicholas Buc, took a scaled-back ASO through a selection of Bond themes in chronological order from the instantly recognisable theme written by Monty Norman for the 1962 release of Dr. No to the latest outing of 007, No Time to Die. Breaking up the musical programme were two short interviews with the only Australian Bond.

The decision to present the music in chronological order may have been a mistake. Perhaps I am showing my own age, but it’s hard to see how anything can creditably follow Shirley Bassey’s two Bond themes: Diamonds are Forever, and Goldfinger. Luke Kennedy and Bonnie Anderson were the soloists and both gave enjoyable performances. Anderson gave solid performances of themes originally sung by Bassey and Tina Turner, but then blotted her copybook by nominating Skyfall as her favourite Bond theme. Kennedy’s spinning and tossing of the microphone was unnecessarily distracting, and I found his switch from tenor to falsetto in one of the newer Bond themes rather abrupt. The show finished with an encore in which it was apparent that Louis Armstrong’s We Have All the Time in the World was not well suited to Kennedy’s voice. The ASO seemed to enjoy the change of repertoire and put in a solid performance.

Lazenby, now 83 years old, was the star attraction. It is remarkable that a man could draw a crowd simply because of a few months’ work done more than half a century ago. Surely this is testament to the enduring success of a movie franchise that is far greater than the sum of its parts. Half of the audience was not yet born in 1969 when Lazenby’s Bond hit the screen. Perhaps a peculiar sort of patriotism drives us to show our support for the little Aussie battler who won the prize of being Bond. And surely many of us hoped to hear a few salacious details, in which regard Lazenby was only too happy to oblige: not since Don Giovanni did a man catalogue his sexual conquests with such relish. Like Austin Powers (a back-handed tribute to Bond), Lazenby is a man who has failed to move with the times. Perhaps this is part of Lazenby’s stage persona, but Austin Powers (The Spy Who Shagged Me) may have borrowed more than the jabot from Lazenby’s Bond. Lazenby was wearing a dinner suit for the evening, but the tie was missing, and any vestige of formality was dispelled by what appeared to be a comfy pair of slippers. He cut a rather tragic figure, more Sir Les Patterson than Commander James Bond, but there were moments when we glimpsed the wit and audacity that enabled a car salesman with no acting experience to land one of the most prized parts in cinema.

Perhaps Lazenby never took the job seriously, and the attitude that won him the role was in the end also why he made only one film. Ian Fleming’s character, on the other hand, has moved with the times and had enduring appeal, as has the music that is an integral part of the Bond formula. 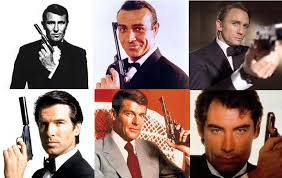