The anxiety of the late Renaissance centred around how to improve on perfection as represented by Michelangelo, Leonardo, and Raphael.  Vasari thought that the Venetian Jacopo Robusti (‘Tintoretto’) could have entered the Pantheon had he not been so slapdash, too much in a hurry, a jester, lacking ‘finish.’ But ‘the little dyer’ didn’t want smooth or polished finishes to his painting: he worked fast and wanted urgent, dramatic, hectic, even chaotic pictures, with different types of light and a spurning of settled perspective.  Even colouring for him was a dramatic device. Not for nothing was he referred to as ‘Il Furioso.’

At times, his work could be almost cartoon-like (see, for example, his Christ at the Sea of Galilee, or The Last Supper, both below) – yet cartoons have their place in art, particularly dramatic art. And he could finish works in more orthodox fashion, it was just that he “considered his painting complete when he had conveyed his vision…So he left it at that.”*  Such as his ‘Saint George and the Dragon,’ “…where the weird light and the broken tones add to the feeling of tension and excitement. We feel the drama has just reached its climax. The princess seems to be rushing right out of the picture towards us while the hero is removed, against all rules, far into the background...”^

“The composition of the Miracle of St. Mark is very carefully worked out; each figure is balanced by another, each motive matched by counterpoint, and though the picture is a very large and crowded one, even the most subordinate figures are fitted in with scrupulous care. The St Mark plunging in to save the captive who had called upon him in his extremity is a daring figure in the most unusual foreshortening, and the colour – strong, singing, unexpected in its contrasts and harmonies – is sudden, brilliant and astonishing. This is the first picture in which Tintoretto displays all that he had learned from Titian, and makes full use of the start which Titian gave him stylistically, but, true to his own vision, he concentrates his forces into a single fleeting moment, and carries it all through in one surging movement and rhythm. Michelangelo makes a brief appearance in the figures over the distant door, and the plummeting St Mark could derive equally from the Sistine Ceiling, or Raphael’s Loggie decorations.” ~

Look at his companion pieces concerning the body of St. Mark, patron saint of Venice. To old eyes viewing them, everything is wrong – the perspective, the alternating light and shade, the lack of a central or unifying focus, the unharmonious gestures. There is something weird and rather wondrous going on in both pictures: something biblical, “the impression of a tremendous mystery unfolding before our eyes.”** The first picture is of tomb raiders in Alexandria, turfing bodies from their caskets, looking for the deceased saint.  “Found him!” could be the subtitle to this work, or maybe “Stop, you’ve found me!” for the spectre of the Saint stands (unusually off to the side), his carnal form lying at his feet, lit by a preternatural light. Already the saint’s unearthing has wrought miracles, in the right foreground, but the haloed saint is looking to the upper right, telling the men they can stop desecrating other coffins. And in the second image, heavenly strife ensues with the bringing of the body to Venice. 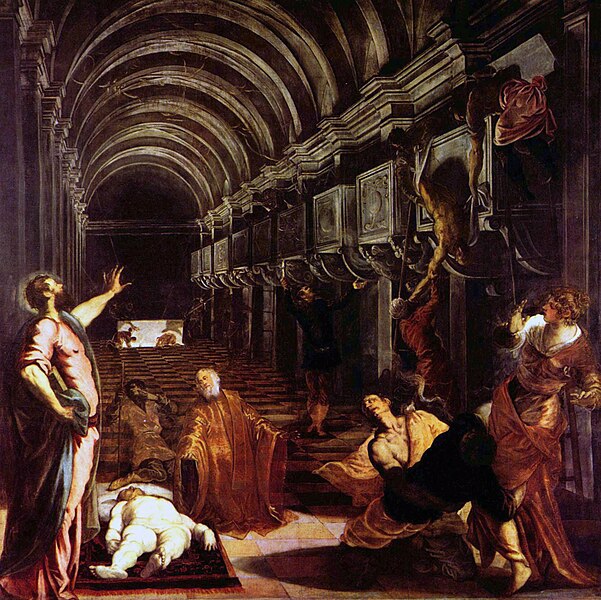 He is always dynamic: “The magnificent Esther at Hampton Court…is a perfect example of another Mannerist device: the momentary movement caught and held. Everything is in motion; the king rises, Esther slips fainting towards the ground, her women move to catch her, the crowd strains forward to see, and the instant the artist has recorded is as transitory as the passage of time itself.”~ ~

“...immense energy…the glowing health of the figures he painted, and more still…his effects of light, which he rendered as if he had it in his hands to brighten or darken the heavens at will and subdue them to his own moods.” %  In fact, Tintoretto was not a Mannerist: “…his work is sometimes elegant and sometimes a little abstracted, but it is never polished and always fired with a disqualifying energy.” +

“He was an audacious but not always a careful draftsman. He did not make many drawings…His ideas flowed from his brush…[in his works] there is agitation, a radiant convulsion of tempestuous forms.”# (It is no surprise that Tintoretto, of course along with his early mentor Titian, were admired by and influenced El Greco.)

And what are we to make of, ‘Paradise,’ then the largest canvas ever painted (74 by 30 feet). “A stupendous work containing hundreds of figures, it is so removed from every tradition of art that those whose spirits are fettered by academic standards consider it a piece of eccentricity and nothing more.”^*

Compare Tintoretto’s ‘Last Supper’ with Leonardo, done a century apart. Without weighing into which is the better, one can appreciate that Tintoretto’s take is truly melodramatic, ‘modern,’ and full of mystery: “...the entire atmosphere of the hall is filled with luminous clouds among which angels can be faintly distinguished. The Saviour radiates light as do the heads of the disciples, and there is a lamp as well. And yet it is all so real that the beholder asks himself to what world he has been transported.”^^ The mythology of the Eucharist looms large in the latter work. 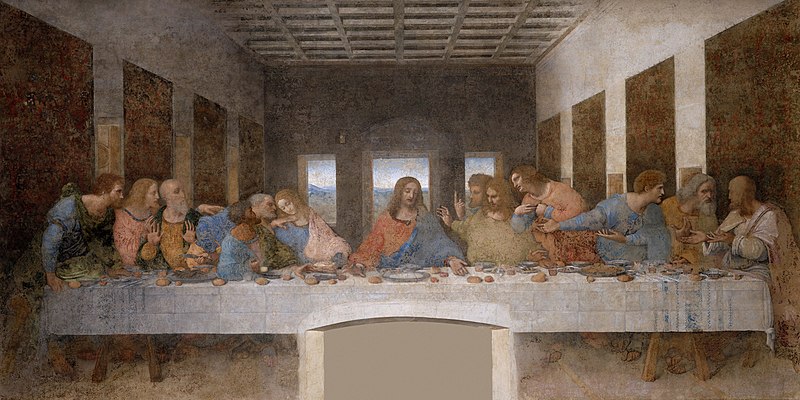