It is not Covid-19, but FLU-68 that is destroying Australian television.  Fervid Ludicrous Upscaling first infected Australian drama series writers (and directors) in 1968, causing them to throw Charlie Cousens off a silo in the eponymous town of Bellbird (ABC 1967-1977). Each generation of writers catches it from the last and is less able to resist its degenerative depredations, no matter how many doses of Edge of Darkness (BBC 1985) or Better Call Saul (Sony etc., 2015-2019) vaccine they have had. Perhaps there’s been a switch a la The Young Doctors (1976-1983) and the syringes are filled with Erinsborough tap water.

Australian tv drama scripts invariably start out enthusiastically with fresh ideas (fresh at least to Antipodean scripts) – five friends buy a big share house, foster parents set up in a caravan park, twins separated at birth fall in love. The writing is never brilliant, but in the early episodes it is considered and serious. After a short time, however (and there must be an equation for this), the characters morph into labile escapees from The Bold & The Beautiful, the scenes deliquesce into lazy melodrama and the plot becomes predictable and convoluted.

The writers of Wentworth resist FLU-68 until the end of series 3. Then, like Toadie driving off a cliff, the nuanced stories of inmates’ and officers’ crime and punishment plunge into the slough of mad staring, tired cliffhangers, child-napping and arson. Whether the following 6 series are worth watching depends on whether the writers can be purged of the FLU.  History and Chances (1991) suggest that they cannot.

Wentworth is of course a new Prisoner (Network Ten, 1979-1986); a womens prison story, set earlier than the original series (in events, if not chronological time). Some character names and biographical details are retained, but the characters themselves are different. Wentworth’s Lizzie Birdsworth (Celia Ireland) is not a younger version of the wizened, cackling Lizzie Birdsworth (Sheila Mary Florence) we all know. Vera ‘Vinegar Tits’ Bennett (Kate Atkinson) is not Fiona Spence’s Vinegar Tits (although we learn where the name rather imaginatively originated). The Prisoner theme song On the Inside is used cleverly at the end of the first episode to remind us where it all began, and then mercifully dropped.

The plots are, even from the beginning, to be taken with a bucket of salt. Women who have their hands neatly ironed in the famous steam-press (an over-used trope this time around) suffer nothing worse long term than a little light scarring. Characters recuperate from multiple kicks to the stomach and teeth-shattering punches with an afternoon lie-down. The governor takes a personal interest in prisoners’ personal lives. Male prisoners work with the women in a prison garden. The governor puts out a prisoner’s eye with a pencil.

Performances are uneven. Pamela Rabe is magnificent as the handsome, steely and clearly insane governor Joan ‘The Freak’  Ferguson. Sally-Anne Upton plays the predatory Lucy ‘Juice’ Gambaro with verve. The aforementioned Celia Ireland is real and solid as the empathetic Lizzie Birdsworth. Kathryn Beck is a standout as the all-too-briefly-seen swivel-eyed junkie Skye Pierson. Old-style Kris McQuade‘s villainous Jacqueline ‘Jacs’ Holt is also gone all too soon. Nicole da Silva captivates as the sexy, grinning, hardened Franky Doyle (although we wish she had been allowed to be tougher yet). Katrina Milosevic shines in the comic role of Sue Jenkins (known as ‘Boomer’ because she always comes back). Unfortunately some main characters are miscast. Danielle Cormack, although engaging, cannot sink to the nasty depths required of top dog Bea Smith. Shareena Clanton portrays indigenous, soft-hearted Doreen as the rolling-eyed idiot in a school play. There are corresponding examples of clever (or lucky) casting. The fingernails-down-a-blackboard qualities with which Tammy MacIntosh and Libby Tanner are blessed come in handy in their roles as an annoying activist and an irritating psychologist.

The few male actors (Aaron Jeffery, Robbie Magasava, Martin Sacks) are clearly chosen for their charms, which makes a nice change (even if they fall short of the mark in TVC’s opinion).

We hope that the writers of series Wentworth 4, 5, 6, 7, 8 and 9 are not yet too far gone with FLU-68 because Wentworth is an addictive entertainment, up to the shark-jump in late series 3. It may yet be rehabilitated. We fear, however, that FLU-68 is as inescapable as a maximum security life-sentence without parole. 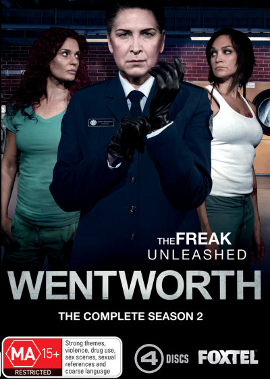