Written and directed by Paul Schrader (2018)

As Chesterton is said to have said, ‘When you stop believing in God, you start believing in anything.’ This small but intense film about loneliness, isolation and moral agony, centred upon a narrator in crisis, echoes to an extent Schrader’s script for Taxi Driver, and its catharsis is similarly flawed, albeit more ambiguous. Much of the initial reaction has been to declare this film Schrader’s masterpiece, but we are of the view that his best film by far is the superb Affliction (which, again, bears some superficial resemblance to that on display here).

Ethan Hawke (in an internalised, trembling, taut performance) is Reverend Toller, in charge of a dinky little church in a dinky little parish, more visited by passing tourists than his flock. Toller has lost his wife and son and is rapidly losing his faith, seeking to view his despair as the necessary adjunct to hope, finding solace in the bottle.  He starts a journal (always a bad thing for loners) and becomes embroiled in pastoral care for a man ( Philip Ettinger) who has worshipped at the altar of dangerous anthropogenic climate change.  He tries to assuage but ends up absolving, and the audience, believers or not, hanker for some old time religion, a bit of blood and thunder, dispensed by, say, Max von Sydow from The Exorcist or Elmer Gantry or the honey-and-horse-sense of W.G. Fay in Odd Man Out.  Of course, Toller’s help is no help – a fish out of water cannot assist another – and after his parishioner blows his brains out (as Noel Coward might say, he must have been an incredibly good shot) – Toller and the widow (Amanda Seyfried, good in a muted role) discover a suicide vest secreted in the garage. That vest becomes a sort of plot trope and emblem of Schrader’s theme of destruction and despair, as it did briefly in Wiener Dog.

Here the film veers into knight-in-shining-armour territory. Like Travis Bickle, washing the scum from his cab, deciding to go postal and wash the scum off the sidewalk, the reverend becomes the defender of Gaia herself, leading the charge against the various (small town) corporate forces degrading the earth.  It is tempting to see this not-so-smooth segue in purely subjective terms, a measure of Toller’s confusion and need for certainty, meaning and a mission – a defiant signal of virtue; alas, it seems all-too clear that we are meant to spoon-down the gruel of Schrader’s eco-message, one that shows considerably less courage than might have been applied, with more interesting results. It does facilitate the entry of handy villains in the form of the local industrialist who quarrels with Toller about climate change, and the ‘enabler,’ a very likable, common-sense, flexible, and thus dangerous Church leader (Cedric Kyles, in a terrific performance).

But despite flaws and uneven tone, First Reformed is still of definite morbid interest, beautifully shot and played, with surreal touches on the nature of faith, transcendence, blood and soil, and a finale that resonates without inspiring, where Hawke wrestles with both angels and demons in the vestry, while the various evil dignitaries await him in Church, and there is terror, frustration, flagellation, and a kind of freedom. 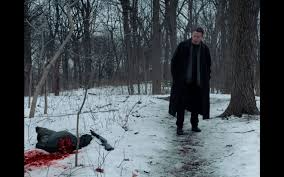