Pablo Larrain’s fiction about an imagined few days in the life of Diana, Princes of Wales at Sandringham Castle, Christmas 1991 will make you feel really sorry for that woman. Not Diana. Heavens no! But Kristen Stewart.  The poor thing does very well in portraying Diana despite a poor Sloane Ranger accent and a script as leaden as the lining of a butler’s sink. Stewart gives Spencer’s Diana just as much weight as she merits – none.  Spencer’s Diana is a whiney, entitled, disrespectful, self-centred fool. She’s world-weary and heartily sick and tired of the demands that those nasty Windsors make. She’s different, wild and modern! It’s rotten being a princess. She throws a tanty whenever a servant bothers her by knocking on her door to request that she come out because she’s late again. She stamps her feet when told that people are waiting for her. She tears her hair out in misery and despair when shown the luxurious, custom-made clothes that are set out for her every engagement. She goes so far in her defiance as to wear her Boxing Day lunch outfit to church on Christmas Day. So there!.

Oddly enough, the only two other viewers in the cinema saw things differently. They felt sympathy for Diana’s position and tut-tutted indignantly every time she was asked to do something unreasonable – such as dress for dinner (there’s a lot of dressing for dinner) so perhaps this is a film for fans of the late Princess of Wales (although even that seems doubtful). It is certainly not a film for fans of good film-making.

Kristen Stewart does rather overdo the Diana mannerisms, which she has down pat. We know that Diana artfully arranged her pose when she saw paparazzi – although why she considered looking up through her fringe to be appealing is anyone’s guess – so it’s doubtful that she really moue’d and tripped about like that in private, but that’s a fault of direction (one of many in this turgid production). This unpleasant portrayal of an obviously mentally unwell woman could be fine and interesting if Spencer was a good film, but it is not. It is shallow, turgid, silly and – worst of all – boring. This reviewer nearly walked out after 40 minutes of Diana vomiting, Diana bingeing, Diana sulking, Diana being late for every course of every meal.

Yes, the British Royal family are stuffy and insular.  Yes, there is a lot of rigmarole involved in being a royal, even in private, but isn’t that obvious and kind of the point?  After a decade as the Princess of Wales and as mother of the heir to the throne of England, Spencer’s Diana has to be told by Prince Charles (a very good Jack Farthing) in a nice bit of expository dialogue, that she needs to shut her curtains when she’s undressing and put on a bit of a mask for the public.

Poetic licence is one thing, but it has to be poetic, not pointless. Luckily, in Spencer, Diana’s deserted childhood home just happens to be next door to Sandringham. So in the night she goes wandering over to the fence with a pair of wire-cutters and breaks in. (Oh, security hate her, she’s so uncontrollable). She wanders about in a boofy evening dress and goes all misty-eyed when she sees her childhood bed and toys that are mysteriously and picturesquely still there. She’s wearing the necklace of eyeball-sized pearls that the Prince of Wales has given her, Charles having forgotten (or never known) that he gave the same item to Camilla Parker-Bowles (Emma Darwall-Smith, seen briefly). Diana finds the necklace asphyxiating and repeatedly rubs the back of her neck. A ghost appears. We don’t want to include any details that might spoil the subtle and surprising elements of this script, (by Steven Knight) so we’ll only hint at whose ghost it is. You’d never work it out. It’s the unhappy wife of a former king of England who got an axe applied to just that part of her neck. That’s all we’ll say. When the Page of Sandringham, Major Alistair Gregory (the always excellent Timothy Spall, looking a bit thin now), tells Diana a meaningless story about a friend who had his face blown off in Belfast, just as he (the friend) was recounting a story about a wild horse that could not be tamed, Diana responds, (just as we pray she won’t), “I hope they never tamed the horse”. That is the standard of the dialogue. The lovely Stella Gonet as Queen Elizabeth has about two lines; something to do with having one’s face on a coin. Otherwise, all she has to do is make that face look disapprovingly at Diana. 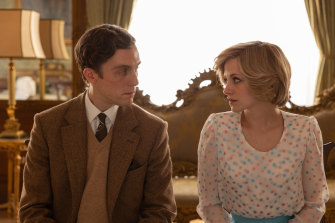 A match made in Hell

The Sandringham interiors are glorious. The viewer though, is constantly denied scenes which it could be expected that the target audience would want to see. For example, much is made of the imminent and family opening of Christmas gifts on Christmas Eve (SO tedious) but after all the teasing, we see only the aftermath. Instead there are long scenes when Diana stands outside or sits in a basement kitchen expatiating on all her personal problems to the kindly military Chef, Darren (a truly marvellous Sean Harris).

There are a few good moments which demonstrate what this film could have been.   Diana’s lovely relationship with her sons (Jack Nielen and Freddie Spry) is blighted by her sharing of adult issues with them. William is sensitive to her issues and desperately tries to keep her on the rails. A fine performance from a young actor, and a tribute to the real William, if there is any truth in his portrayal. Well done also is the revelation made by Diana’s preferred dresser (Sally Hawkins is captivating as Maggie). It’s an out of place moment shoe-horned into the story, but amusing nevertheless, and the only surprise in the audience’s nearly two hours of trudging misery.

The ending is utterly ludicrous. We won’t give away what happens, but suffice it to say, it is the low point of this shocker.