The Man Who Shot Liberty Valance

We accept violence in the defense of life, liberty or country, on the sports field, or in delivering the brutal, hurtful truth. We get all of this, in various forms, in John Ford’s most intriguing film.  When it first came out, the critics hated it – ‘dull’ and ‘predictable’ was the general consensus. But after one gets over the shock of James Stewart playing a young law student, or John Wayne wooing young-enough-to-be-his-daughter Vera Miles, we can see that this film is really a classic, the Monolith of all westerns*, focused on the genre’s key trope, the old ways giving-in to the new, save only for myth: “This is the West, sir. When the legend becomes fact, print the legend.” That statement doesn’t make sense as read, but when you watch the film, it makes perfect sense. A lie can travel around the world while the truth is still putting on its boots, but living a lie makes for a life of sadness. 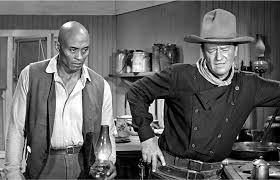 “Liberty Valance is the toughest man south of the picket wire…next to me.”

Shinbone is a frontier town. What would bring an important man, a Senator (Stewart), here, all the way from Washington? So ask the press men from the local newspaper, and their curiosity is piqued further when they find Senator Ransom Stoddard is attending the funeral of obscure rancher Tom Doniphon (Wayne), lying forgotten and bootless in a plain pine box. After all, Stoddard is the State’s most famous son, a driving force behind statehood who stared down the greedy cattlemen, an elected official of good standing, and most crucially, the man who shot evil thug Liberty Valance (a great and savage Lee Marvin) – why someone didn’t shoot him earlier is unexplained, although he is a scary guy and seems to have affluent backers. And why does the Senator’s wife Hallie (Miles) wear such a haunted expression?

To learn the answers to these questions, we have to go back a generation (which in Hollywood, means a ‘flashback.’) Shinbone was not then a cute little town; it was a dirty hole, tended by a useless coward of a sheriff (a raspy, comic Andy Devine), ruled by Valance, a gun-slinging Caligula who robbed and pushed people around with impunity. Stoddard’s introduction to the region consists of being robbed, whipped, and having his law-book shredded by Liberty and his goons (or as Dutton Peabody would express it, ‘his myrmidons‘, played by Lee Van Cleef and Strother Martin). Recuperating under the tender mercies of restauranteurs Pete and Nora (John Qualen, Jeanette Nolan), Ranse has his eye on illiterate waitress Hallie, who regards her ‘Pilgrim’ as preferable to crass rancher Tom, despite the lovely sun-room he is building, and because of lines like: “You’re awful pretty when you get mad.” 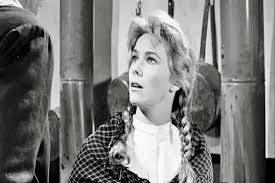 When Ranse hangs up his shingle and starts civilisin’ the folks, Valance objects, monstering the town’s journalist (Edmond O’Brien) and eventually calling on the ‘young’ man to face him and draw. We won’t relate what happens, but there is a twist, which is revealed later and torments certain characters for half a lifetime. And John Wayne ends up lonesome, a bit like in The Searchers. The ending seemed to us entirely satisfactory, wistful, and apposite.

The film is at times just a little too leisurely, a smidge too long, but then, we can’t think what should be cut.  Moreover, its broad, unhurried pace enables us to take in the richness of a saga which covers much more than a love triangle. Valance and Doniphon represent the Old West, passing into history (i.e. myth). Shinbone is learning how to read, exchanging guns for the power of the press, exercising its vote, and going to law, not war. Of course, women are still confined to the kitchen, and black servant Pompey (Woody Strode, in a fine performance) has to wait outside while the white folks eat, drink or vote, but then, equal rights were still a hundred years away. ‘”That all men are created equal.” That’s fine, Pompey.” “I knew that, Mr. Rance, but I just plumb forgot it.” “Oh, it’s all right, Pompey. A lot of people forget that part of it.” 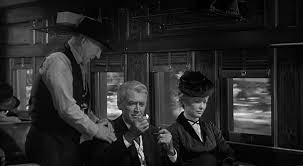 “Nothing’s too good for the man who shot Liberty Valance.”

Guns and booze, those great consolations of American life, loom large. (“Courage can be purchased at yon’ tavern!”) The local doctor is a drunk. The newspaper editor is a drunk. The Sheriff is a drunk, and it doesn’t even give him courage. One of our favourite scenes features Tom teaching Ranse how to shoot, and how to cheat. It reveals the lawyer’s emerging defiance, and also that he throws a good punch. The Man Who Shot Liberty Valance mops up all of the clichés of western movies (and then some), dips them in warm gravy and spoons them in with mashed potatoes, but this is a meal that ‘sticks to the ribs’. Wonderful stuff.

The Gene Pitney song (by Burt Bacharach and Hal David) was recorded shortly after the film’s release, but is an impressive and accurate summary of the story…