Another serving of much-needed food-for-thought from the John Bray Alumni Network of the University of Adelaide: this one from Bill Smith AM, former plod and police prosecutor in Whyalla (country SA) who came to the Big Smoke, got his degree, and found himself immersed in the frustrating but fulfilling world of international criminal justice.

Modern crimes against humanity, in reflection of the new world order, have been somewhat inverted in practical application. Whereas a whole new jurisprudence had to be developed in the wake of the crimes of the Nazi regimes, the end of WWII, the development of international human rights and institutions, the protective yet threatening shadow of the Cold War and its two-edged sword of Mutually Assured Destruction, that ultimately resulted in what some mistakenly considered the ‘end of history’, meant that the cause of international justice was often ‘put on hold.’ After all, when you’ve got Iron Curtains and “Great Leaps Forward” to contend with there’s not a lot of seeing right be done. But the collapse of the Soviet Monolith in the late 1980s, coupled with the re-setting of dominoes in South East Asia, led to the Agony of Little Nations.  So the departure of a strong man like Tito from Yugoslavia, and the revered Prince Sihanouk from Cambodia, left dangerous lacunae that would be ultimately filled, in the former case, by various sides with historic enmities now unchecked and rampant, and in the latter, by the Khmer Rouge.

Bill began his international career by cold-calling the International Criminal Tribunal for the Former Yugoslavia, a Court created by the UN Security Council (a fine irony is that the permanent members of the Security Council can place themselves beyond the purview of international criminal law, which is why we hear plenty about Slobodan Milošević, Radovan Karadžić, Ratko Mladić, Hashim Thaci and Slobodan Praljak – seen below, chugging poison in 2017 after stating “With disdain, I reject your verdict!” – but little about Bill Clinton and the 23,000 pieces of bombs and missiles he had dropped on Yugoslavia).

Because of the prevailing situation, the ICTY could not hold hearings in Yugoslav territory, and obstruction also arose by virtue of the tense “collaboration” between prosecutors and police: hence the Hague served to sequester counsel and witnesses.

Then, in the noughties, Bill commenced prosecutorial work in the Extraordinary Chambers in the Courts of Cambodia, a compromise hybrid between the Cambodian Government and the U.N., concentrating on the alleged crimes of the Khmer Rouge (which in the late stages of last century still occupied parts of the country), whose diligent efforts led to about 2 million people meeting premature death in the notorious Killing Fields (see main image). 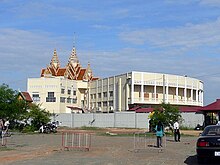 Mr. Smith explained in eloquent terms that in countenancing 25 year old events, with structural, budgetary and time constraints, a defence line-up as diverse as the U.N. itself, a lack of unanimity in the host country, and the world watching, prosecutors needed an agile, adaptive approach. Whilst it would have been tempting to try the top members of the gang as a job lot (and even more tempting to move straight to an auto-da-fé), it was soon recognized that, with Pol Pot gone to pot, they’d have to take his retinue on more or less one by one.  Like ‘Comrade Duch’, many of these old patriots, despite overwhelming evidence of their Marxist zeal for kidnapping and murder en masse, tried to run the Nuremburg defence, which was of no avail.  Subject to the grinding tedium of the inquisitorial method, deaths of the old recalcitrant guard by natural causes or otherwise, and many appeals, the wheels grind slowly but exceedingly small.

Smith had some good advice for enthusiastic young lawyers wishing to get involved in international criminal trials. Get some legal experience first, perhaps with such matters in your own country (Bill started his involvement with cases like the Polyukhovich prosecution here in Australia). Try to get some experience by assisting in a voluntary or pro bono capacity. Do research and write articles, try courses and perhaps ascend to work as a tutor, or pursue a Master’s degree.  Seek an internship and do an ‘externship.’  Above all, diversify and keep abreast of events as they unfold: the area is dynamic (but we guess probably not that lucrative! Hence openings may exist).

And he ended a thoroughly engrossing address by referring to the somewhat depressing realpolitik we face today.  The International Criminal Court needs funds, of course, but more importantly, it needs strengthening and a quickening. A good part of this would happen if many states around the world would ratify, not rat on, or cease to ignore the Rome Statute of the International Criminal Court. Another positive step would be the permanent members of the Security Council withdrawing their vetoes along with their patronage of criminal goons and massacre-artists, such as in Syria. Yes, you know who you are! It must be vexing for the likes of Bill Smith to expend intellectual, emotional and sheer physical energy in bringing international villains to heel, while the likes of the CCP and its running dogs oppress millions and sell them into slavery or worse, and Russian kleptocrats and their cronies behave like gangsters while negotiating immunity for life, from the sun-bleached steps of their dachas.