The Ring Without Words

And we thought trying to present Every Musical Ever in an 80 minute show was audacious: in 1987, conductor/composer Lorin Maazel, one of the few Ukrainians we’ve heard of, created a “symphonic synthesis” with the Berlin Philharmonic of Wagner’s Ring Cycle (the tetralogy taking about 16 hours in full), reduced to a 77 minute recording.

The Adelaide Symphony Orchestra’s Conductor Laureate Nicholas Braithwaite, a great friend of the RW Society, gave a very informative and entertaining talk (with musical and visual demonstrations) deconstructing how this epic of concision was achieved. Maazel eliminated the words and cherry-picked key musical elements to represent plot and character, and doing so without ‘cheating’ with the interposition of transitional music or links was a mighty editing effort indeed. (We’ll take the unexpurgated version, however, when we’ve time to spare).

Broadly speaking, Maazel starts submerged in the Rhine; then up country to the mountain, inspecting the building work; underground in the metal-shop; over the bridge; a storm of weather and incest in the woods; a ride of the Valkyries; Wotan puts Brünnhilde to sleep; Siegfried cuts a swathe through the forest; He finds Brünnhilde and then his fate; the funeral service and pyre and we close the circle.  Note that all synopses sound ridiculous put so starkly.

Nicholas Braithwaite will lead the ASO at Adelaide Town Hall on 29 and 30 July to present Maazel’s ‘Reader’s Digest’ piece, plus a lush selection of Strauss songs, in a show entitled Symphony Series 5 – Spellbound. (The programme is listed below). Nicholas explained that he would cheat a little (thank heavens, PBUH) by adding some words, hopefully to be sung by Nicole Car, who is on the programme. As an added attraction, The Varnished Culture will be (hidden) in the audience! Tickets are selling fast.

ASO Horn player Emma Gregan gave a short, dazzlingly technical talk about how the horn section prepared for such a concert, including the transpositions in the score and calibrating the esoteric Wagner Tuba. Whilst the musicological explanations were well above your correspondent’s pay grade, it was reassuring to bask in Gregan’s deep but lightly-disported and enthusiastic learning.

As a finale, Michael Ierace and Anthony Hunt double-teamed on the piano to present Souveniers de Bayreuth by Gabriel Faure and Andre Messager, a series of themes from The Ring arranged as jolly quadrilles. TVC admits that it crossed its arms and harrumphed slightly –  the playing was really excellent and the mash-up of Wagner tunes often highly amusing, but we could not but imagine the Maestro’s reaction to such pieces – he would have spat his lunch. However, it was an amusing coda to an enlivening and educational afternoon, and serves as an amuse-bouche to the concerts later this month. 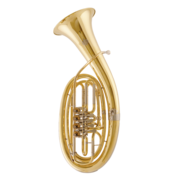 The “Spellbound” programme will include:

Wagner conducts on stage at Bayreuth