A nice night in

Unlike another recent Netflix offering set in Sweden (Midsommar), the natives in The Unlikely Murderer are not beautiful; nor do they dance among the buttercups. Rather, these Swedes are generally jowly, live in flimsy brown apartments and are spared nothing by the close-ups of their pores and the 1980s fashions (did such a high proportion of Swedish women really suffer under mushroom haircuts?)

The Unlikely Murderer is based on the true life assassination of Prime Minister Olof Palme (Peter Viitanen), below, in the town of Täby, north of Stockholm.  After the Prime Minister and his wife (a terrific, hard-edged Cilla Thorell) left a cinema on the snowy night of the 28th February 1986, Palme was shot and killed by a lone assailant. There was a person convicted but he was acquitted on appeal. To this day there has been no-one brought to justice. 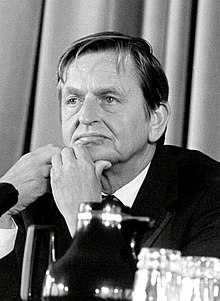 Stig Engström (a similarly excellent Robert Gustafsson*), a middle-aged graphic designer at Skandia in Täby, is rotund, bald and resentful. He is loathed by his colleagues – save for kind-hearted Gunhild (Lia Boysen), reminiscent of Francois Pignon’s secretary, Mademoiselle Blond, in The Dinner Game.  Indeed, Engström could be Monsieur Pignon gone bad, very bad. Engström is angry and unbalanced; despised, suspected and pitied by his wife Margareta (Eva Melander); ridiculed by his bridge partners.

The Swedish police find Engström an unlikely murderer due to his poor health, clean criminal record and general air of impotence. But the writers of this series consider him to be the likely murderer because of his paranoia, loathing of Palme, access to and familiarity with guns, and his presence at the scene. The series moves between early scenes on the night of the shooting (when we see Engström kill the Prime Minister) and its long aftermath.

Engström craves the media attention he first attracts as an eye-witness and chases it for years, long after the police have lost interest in him. The police are portrayed as inept, but it is difficult for the non-Swedish viewer to follow their investigation because of the preponderance of similar names and the various agencies involved. Real-life authors Lars Larsson and Thomas Pettersson (Björn Bengtsson) brought Engström back to the attention of the police. In 2020, twenty years after Engström’s death, and thirty-four years after the assassination, the prosecutor rather expediently named Engström as the prime suspect in the murder and closed the case.

The series is in the Swedish language but carefully and satisfyingly dubbed into English with a few sub-titles.

[*Robert Gustafsson (who lacks real jowls) says that he was in the same cinema as the Palmes on that night. He suspects Engström.] [Ed. “But how did you like the film, Mrs.Palme?”]