This is a Robbery

The documentary tells (at Dickensian length) an intriguing story: how in 1990 two men dressed as Boston police officers were admitted to the elegant and boutique Isabella Stewart Gardner Museum, in dead of night, tied up the two slipshod guards and stuck them in a basement area, and helped themselves, in a leisurely fashion, to 13 artworks, several of them priceless (to use an old cliché).

SPOILER ALERT: We have to plough through 4 episodes to learn that, $10m reward notwithstanding, the works have not been recovered, nor anyone charged, so the public display of the oeuvre of such artists as Rembrandt, Vermeer, Manet, Degas, etc., must remain incomplete.

Several suspects are paraded, as if in an identification line-up, to tease us à la Agatha Christie novels. There’s Myles Connor, for example (above), convicted art thief, but he was in jail at the time of the robbery. Or Rick Abeth, stoner shift worker who was gaffer-taped (in an unconventional manner) after letting the ‘cops’ in, and who, curiously, is the only person recorded by motion detectors as having been in the Blue Room, from where Manet’s Chez Tortoni (see below) was taken on the night. 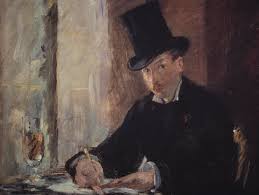 The mafia (Irish or Italian) loom large because of the apparent professionalism of the theft – even Whitey Bulger gets a mention – and the implicated crew, but for one, recently released from prison (tantalizingly ahead of schedule), are dead (shades of James Conway in Goodfellas?). There are several promising leads, but the veracity of Boston gangsters being somewhat moot, they head up blind alleys. And the mob generally pocketed pretty things to trade for early release, not to send to some sheik in the UAE or Paul Getty.

One is left entertained (particularly by the museum director, deflecting her own lack of decent security arrangements by a goodly dose of hand-wringing) but at the end of the day, the viewer, awash in dizzying timelines, charts, plans, flashbacks, cinéma-vérité scuttlebutt and a surfeit of padding, wonders what all the fuss (viz., this series) was about.

Instead, The Varnished Culture will make its play for that $10 million (U.S.), inspired by Agatha Christie, both her short story “The Apples of the Hesperides” and Murder on the Orient Express:

OUR SOLUTION: They were  ‘all in it.’ The ‘cops’ were either Irish or Italian hoodlums. The guard was merely dumb and sloppy. The Manet didn’t go missing until the next morning, in the confusion – that’s an inside job. The gangsters stole to order but after helping themselves to the more chintzy, less valuable stuff (the Napoleon eagle, the Chinese vase) they parked the remainder in order to negotiate better wages, after seeing reports about the haul’s value. Then they were executed. In that they were doubtless devout if not totally absolved Catholics, one of their daughters at the time was about to take final vows.  She had these to atone for the sins of the father, or was given them on licence. The walls of a chapel in some obscure convent in New England display the art, which is why, despite a $10m reward, they have never surfaced, it being a place where “ordinary material values do not apply.”

“Inside job? On the other hand, taking that tape off is going to hurt like a Cheech & Chong skit…”