Face It, Western Civilisation: You Lost

“It’s Time”, to borrow an old political phrase, Last Orders for Western Civilisation and its running dogs, time even for soldiers in the cause to lay down their easels, quills, violins, compasses and chisels. You got beat – not by folks who were smarter (quelle idée!) or had a worthier plan. They had simply worked-out O’Brien’s dictum that hate was not more exhausting than love. In fact, it could be spread more evenly, calibrated and cadenced, and thus more effective over time. They understood that destruction is an essential part of the human condition and that righteous destruction is virtually unstoppable. And they had more energy, ultimately, being schooled in implacability; being unburdened by enlightenment; not attenuated by rationalism, nor distracted by freedom. One of our own dead warriors summed up the situation in a poem:

Mere anarchy is loosed upon the world,

The blood-dimmed tide is loosed, and everywhere

The ceremony of innocence is drowned;

The best lack all conviction, while the worst

Are full of passionate intensity.*

At the NGV in Melbourne recently, a city clogged with too much traffic, streets filled with apprehended violence, and a general insouciance, we caught the tranche of recent material, much of it astride the walls like riders in a posse we have come to call the Post Eternal Phase (forgotten as soon as one turns away):

As Robert Hughes said of the other pile of bricks (at the Tate), “anyone except a child can make these things…” 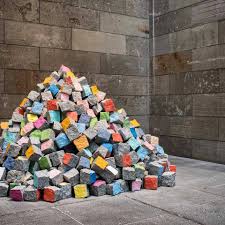 The above (dated 2015, as if that mattered) is by Pascale Marthine Tayou, and entitled “Coloured Stones (Pavés colorés)”. The notes suggest it is “an arrangement of quarried granite paving stones, each selectively sprayed with a primary colour. The paving stones reference the times of social unrest during which they were collected and used to combat police and anti-revolutionary forces; for example, during the French Revolution and the May 1968 student protests in Paris. The paving stones and range of colours point to the allegiances and divisions that make up any modern community, as well as to the concrete political history that lies beneath contemporary culture.”

We would dare suggest that one might better ‘reference’ the French Revolution by putting on steel-capped boots and kicking the crap out of this crap; and the 1968 protests by getting two arts students to have a shag under the blocks. We note that NGV exhorts children to “On your way home, think about what kind of things on the street could be made more beautiful or colourful.”  TVC suggests Canaletto might be more inspirational:

Remember Tracey Emin?  Yes, she’s still about, still at it:

“While much of [Tracey] Emin’s work (sic) speaks of her life and experiences, recently she has been creating text portraits…’The passion of your smile’ is a portrait of George Clooney, whom she had never met, but equally speaks to and about the viewer.” [Note on the NGV wall near the neon installation, obviously penned by someone for whom English is not a first language.]

We mean to cast no aspersion on any of these artists in terms of their motives, their competence, or their design. Although we are troubled by the tired, slapdash, unimaginative commodities under the hammer these days – “reference” Jeff Koons, or dear Andy….

…or even worse, the Dutch auction seeming to be run for Mr. Weiwei:

Were Civilisation still in the ascendant, who knows what enduring work they might produce?  But today has no place for Michelangelo, Leonardo, or Raphael, et al, even if we could have them. If Leonardo came back, he’d likely be useless because the formal rigour of training would not be available to him, and he’d miss most of his art classes to attend rallies in town, on one of the incessant pupil-free days, to fulminate at inaction on dangerous climate change and transsexual rights (which reminds us, we lost on scientific method and objective reality as well). He’d be reduced to pasting images of an ISIS-style middle finger on the walls of crumbling infrastructure (after Bansky), which might be problematic, as Leo always struggled painting hands.

What to do? One can keep yelling from the back of the truck, like The Varnished Culture does; Or you can purchase one of those smoke-belching one-way voyages to Mars; Or modernise the Socrates option – head to Melbourne, place yourself in the tender mercy of one of its burgeoning Euthanasia Clinics and check-out peacefully (a viable choice for any remaining acolytes of the soon-to-be-defunct Holy Roman Catholic and Apostolic Church, since they can obtain precise information as to time of death and hence offer repentance just before oblivion).

Or embrace the new non-subsidised culture, available in public we presume for free or tuppence, whether it be written or graphic: